Blue Screen of Death (BSOD) error scares many users, especially those who are laymen. Though, there are many reasons that cause the BSOD error yet one prominent reason is the driver power state failure.

Many Windows users have reportedly faced the BSOD – driver power state failure error. So, you can chill down as you are not suffering alone due to this abrupt anomaly. Thankfully, this error can be fixed too.

Through this tutorial, let us explore the driver power state failure error in detail and then learn about the best methods to solve this error single-handedly.

If you are looking for a smart, robust, reliable, and swift technique of resolving the BSOD – driver power state failure error, then the Bit Driver Updater tool can emerge as your saviour.

This tool is elegantly designed with remarkable features to update system drivers and hence maintain them on your Windows PC over a prolonged period of time.

As suggested by experts, the BSOD – driver power state failure error majorly occurs as a result of outworn, poor or faulty graphics card drivers. Hence, if the graphics card drivers are in an up-to-date state, then it will automatically prevent occurrence of BSOD errors like the driver_power_state_failure.

Therefore, download the tool instantly by clicking the below download button and resolve the problem of system drivers immediately.

So far, we have been constantly talking about the error code – driver power state failure. But if you are an amateur in the field of IT and computers, then let me inform you in detail about the driver_power_state_failure issue first.

Putting it simply, it is one of the underlying causes behind the BSOD error. This typically appears when you are booting your Windows computer. The detailed error message which appears on the screen indicates that Windows is facing some unexpected problem and hence needs to restart.

When users and experts looked more closely at the error message and evaluated it, then the following issues were identified to be the causative agents behind the driver power state failure error:

Sometimes, a simple restart of Windows can magically solve the problem. In other times, you may need some advanced methods. Let us see what are those in detail below.

Also Know: How to Reinstall Graphics Drivers in Windows 10

The best approach to fix the problem of driver power state failure is by updating the graphics card driver. As we have already mentioned that one of the prime causes behind this BSOD error is outdated, corrupted, broken, or missing display card drivers.

So, fixing it straightaway or installing a compatible video card driver is the most ideal solution and you can achieve this with the help of an automated tool like the Bit Driver Updater.

We recommend this method because the manual mathods are difficult and time-consuming to perform. Instead using this recommended automated tool offers several advantages over the manual methods.

Step 3. Then, tap on the “Update” button to install the latest driver software versions and reboot your PC.

Bonus Tip: Know How to Update Outdated Drivers on Windows 10, 8, 7

You can always identify the problem causing drivers in the Device Manager as they will be flagged (if they are missing or corrupted). The way to troubleshoot problematic drivers is by either rolling them back to their previous stable version or else unistalling them from the system. You can follow the below instructions to fix driver power state failure error:

Step 1. First of all, Boot your PC into Safe Mode (if the system fails to start normally).

Step 3. Expand the device components to see if any driver has been flagged by Windows.

Step 4. Then, click right on those device drivers and select the Properties option.

Step 5. In the Properties window, go to the Driver tab.

Step 6. Here, you can click the Roll Back Driver option. 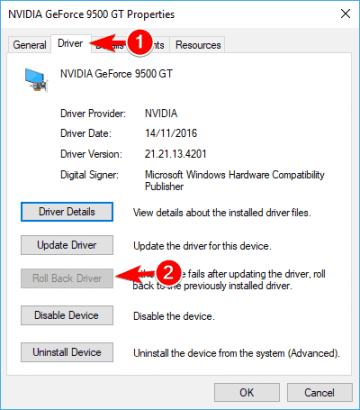 Step 7. Follow the instructions and wait for sometime till the driver is reverted to the previous version.

Step 8. If the Roll back driver button is greyed out, then you can also click the Uninstall button.

Step 9. After the uninstallation, you can restart your Windows to reinstall the correct drivers.

Sometimes, it might be a hardware issue that is causing the driver power state failure error. So, you can try disconnecting the hardware peripherals and then reboot your Windows computer.

At times, it could also be your antivirus program that can lead to the driver power state failure error. You can try disabling your antivirus solution for sometime and see if that fixes the problem.

Finally, you can replace the antivirus program with another software and see if that works out for you.

This is already a well-tried method and according to some users it works and solves the driver power state failure error. The below steps will guide you further:

Step 1. You need to go to the Power options and click on Change plan settings.

Step 3. From the list of settings, launch the Sleep section and ensure that Sleep and Hibernation have been turned off by setting it to Never.

Step 4. In the Power button and lid section, ensure that all settings have been switched to Do Nothing.

Step 5. Finally, click on Apply and OK to save the changes made.

Corrupted system files are one of the most probable reasons behind the Driver Power State Failure error in Windows 10. To repair them, you can try performing a system file checker (SFC) scan on your Windows 10. Here are the steps for the same.

Coming to the conclusion of this article, it can be said that whenever you are seeing the Blue Screen of Death error on your Windows 10 screen and the reason for that is being attributed to stop code driver power state failure, then you can fix it easily by using the above-mentioned ways.

If you see that the aforementioned ways also could not resolve the driver_power_state_failure problem, then one simple and last thing that you could try is just refresh the Windows 10 system once.

Do let us know which method worked best for you by mentioning it in the comments box below. You can find our social media handles above to follow us on your favourite social media platforms.