Fix the Default Gateway is Not Available on Windows 10 [Resolved]

If you have encountered “the default gateway is not available error“, then don’t worry because you are not the only one as many Windows users have frequently faced this error and it can certainly be solved by various ways.

What does the default gateway do?

When the default gateway is not configured on a computer, then it means that there is no intermediate path between the local network and the Internet. Thus, it prevents the devices in one network from communicating with the devices in another network.

When the default gateway is not available on the Windows 10 system, then it is indicated by a yellow exclamation mark when the Windows Network Diagnostics tool is run. You may also see an ‘X’ symbol appearing on the network connection icon on the taskbar.

Fixes for the Default Gateway Not Available Error:

Running the Internet Troubleshooter might resolve the problem for a while. Despite that the default gateway is not available error on Windows 10 can keep happening , therefore, you can permanently resolve it with the below methods.

The antivirus solution on your system can sometimes interrupt with the performance of the PC and interfere with other tools of the system. This is because it constantly tries to inspect the computer by running in the background.

So, if you can disable it momentarily, then it can prove whether the default gateway not available error is due to the antivirus program or not.

You can use a right-click action on the antivirus icon in the system tray or else, you can disable it directly from the program UI.

If the network connection is once again available, then we recommend you to replace the antivirus software with another antivirus program that doesn’t cause such issues.

It is not clear as to how the McAfee’s malware removal tool contributes to the default gateway is not available error but many users have reported this to be the prime cause. In fact, the problem is caused not by the antivirus alone but rather by the entire suite of McAfee products.

You can uninstall the McAfee antivirus software from the Control Panel’s Uninstall feature.

Apart from the antivirus software, the firewall of your system can also cause the default gateway unavailable error. So, if the firewall is part of the antivirus suite, then you can just disable it temporarily. If this resolves the issue, then replace this security solution with another.

If the firewall component is a part of the VPN, then you may disable the VPN and see if that solves the problem.

Other than this, if you think that the issue is cropping from the Lan server, then you can switch to a personal router to resolve the issue.

Have you been experiencing the problem of default gateway not available error on Windows 10 system? If so, then you can just ensure that you have the most recent Ethernet drive installed on the system.

If not, then you can install it by going to the motherboard manufacturer’s site and download the latest Ethernet driver for your system and install it.

Alternatively, you can also update the Ethernet driver automatically with the best driver updater software.

Fix 4: Change the Wireless Mode of Your Router

If you still can’t connect to the default gateway, then you can modify the wireless mode of the WiFi router to restore the internet connection of your system. You can easily change the wireless mode from 802.11n to 802.11a and vice versa. The steps to do so are given below: 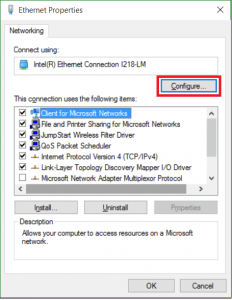 Now check whether you can connect to the internet once again or not. If not, then please move onto the next solution.

Read More: DNS Server Not Responding on Windows: How to Fix It?

Fix 5: Use Netshell Command to Reset the TCP/IP

If you are unable to connect to the default gateway, then you can reinstall the network adapter driver to see if that helps to resolve the error.

You can simply uninstall the network adapter driver from the Device Manager and then restart your system to reinstall it or you can even reinstall it from the manufacturer’s website. 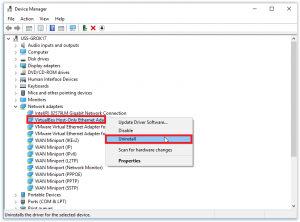 If the above fixes seemed futile to resolve the problem of “the default gateway is not available,” then addressing the outdated, missing, or damaged network adapter driver is the best option to revive the network connection.

After this, as the tool retrieves the list of the defective drivers, you can choose to update them individually (by clicking the update button beside the driver name) or update all of them at one shot (by clicking the “Update all” button).