Search
HomeHow-ToHow to Update Xbox One Controller Drivers for Windows 10?
How-ToKnowledge Base

Microsoft frequently releases firmware updates for the gaming accessory. It can’t be a driver issue, you might think because Windows automatically updates the drivers on a regular basis.

So you must be wondering what else could it be then? Well, it could be that, the drivers are not properly installed. In this case you would need to update the Xbox One Controller driver on your own.

We have rounded up the best methods to update the Xbox One Controller drivers on your own in this blog.

Let us get to know the methods of downloading the Xbox One Controller driver on your own in the below segment.

Before we begin with the methods to update the Xbox One Controller driver, let us first learn how to connect the controller to your Windows 10 system. Sometimes if there are some connection issues then you may not be able to play the game after connecting it to your Windows computer.

Therefore, troubleshooting connectivity issues can indeed help to play the game properly. There are various ways to do so as described below:

If you are here to know how to update your Xbox, the answer would be – please go wireless.

Note that the firmware version numbers vary between the different types of controllers found. There is a hardware restriction although this facility is available only in those controllers that were built in June 2015 or post that date. Those headsets that usually have a 3.5 mm headphone jack located below the controller are almost always beside the extension port.

Follow the steps given below for updating the Xbox controller:

Step 1: Strap your Xbox to the internet.

Step 2: Click on the Settings on your Xbox One

Step 3: Link up to the “Kinect and devices tab.”

Step 4: Go to Devices and Accessories.

Step 5: Find out more options and then click it open.

Step 6: Tap the box known as the Firmware Version to check if any update is available. Tap on the update if there is one, appearing or else, if nothing is visible, it shows your device is updated.

Step 7: Press A if there is a Firmware version box.

Your update for the controller would be downloaded over the Xbox live and would be installed automatically.

You would require a Micro-USB cable for connecting both the devices.

Step 1: Join your Xbox to the internet services.

Step 2: Check in your console for the Settings tab.

Step 3: Go to the tab that reads “Kinect and devices.”

Step 5: Choose from the various options.

Step 6: If the box reads, “No updates,” it means you are good to go and if the box reads that there are updates available please click on it to download it.

Step 7: Press A for the firmware version.

Step 8: Select the “Update Now.” Do not remove the Micro-USB cable while it is being uploaded.

Another way to update the XBox controller is by using the Bluetooth option on your Windows 10 device that also must have the Xbox controller with Xbox One S installed in it. Click to turn on the controller panel by tapping on the Xbox button and then tap on the ‘Win’ key + ‘I’ key to move to the Settings.

Also Read: How To Fix “Origin Won’t Open” On Windows 10

If you are able to fix the connectivity issue as described above, the next thing would be to download the Xbox One Controller driver for Windows 10. There are several ways to do it like updating them manually, or automatically. Here’s how you can do it:

Visiting the manufacturer’s website and looking for the correct driver versions is how you can manually update the Xbox One Controller driver. Now you need to download the latest version of the driver software. These files are usually auto executable and can be installed easily by following the on screen instructions on your computer.

However, this is quite a difficult method and needs a good amount of technical expertise to download driver software manually.

B. Update Xbox One Controller Drivers via Device Manager

If somehow your auto-installation step did not complete while updating your Xbox One Controller driver from the manufacturer’s website then you can update it with the help of the Device Manager as follows:

Step 1: Go to the Device Manager from the Control Panel.

Step 3: Then, select the option of “Search automatically for updated driver software.”

Step 4: Windows will automatically search for the latest updates and you can install them when they appear on the screen.

Step 5: You can further follow the on-screen instructions to complete the process.

Also Know: How to Fix “No Audio Output Device is Installed” Issue in Windows 10

If you wish to save your time and effort, then using a free driver updater tool is a good choice to download Xbox One Controller drivers automatically. We recommend using Bit Driver Updater to do the needful task of updating device drivers on your behalf. 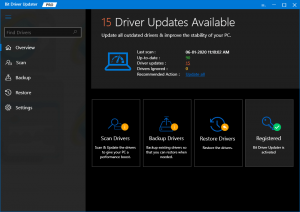 You can visit the website to install this driver updater tool and then scan your system with it to detect outdated, corrupted drivers. Upon detection, the tool looks for updated versions of those driver software. You can install them on your system with a single click and can enjoy your games again.

So, friends this was a complete guide on how to download and install updates for Xbox One Controller drivers on your Windows 10 PC independently.

Hopefully, you can now connect the Xbox One to your PC and play your game hassle-free with the Xbox One Controller.

How to Fix Memory Management Error in Windows 10 [Fixed]

How to Fix Microsoft Edge Not Working on Windows 10 [Solved]

How to Fix Missing Battery Icon in Windows 10 [Solved]

How to Fix HDMI Ports Not Working in Windows 10?